There’s an old saying that “one bad apple spoils the whole barrel.” But that may no longer be the case thanks to new materials being developed by UC Davis researchers to line produce bins and for reusable packaging. The goal was to produce plastics that both repel bacteria and reduce food-spoilage microbes. The antimicrobial activity comes from chlorine bound to the plastic. It would be recharged by rinsing with a bleach solution.

The bacteria-repelling, or antifouling property comes from the plastic itself. It feels slippery, so if bacteria cannot stick to a surface, they cannot grow and form a contaminating film.

An Indian-American professor at the University of California, Davis, is leading a project to develop new packaging materials that could prevent food spoilage by cutting cross-contamination.

Professor Nitin of UC Davis’ Departments of Food Science and Technology and of Biological and Agricultural Engineering, along with Professor Gang Sun, Textiles and Clothing, and Professor Glenn Young of Food Safety and Technology, are hoping to produce plastics that both repel bacteria and reduce food-spoilage microbes, according to a recent press release from the Center for Produce Safety (CPS). The CPS describes itself as “a collaborative partnership that leverages the combined expertise of industry, government and the scientific and academic communities to focus on providing research needed to continually enhance food safety.”

Before embarking on the research, Nitin and his group met with representatives from the Center for Produce Safety as well as several other industry representatives, including some from the apple industry. “The input and feedback we’ve received from them has been very encouraging,” Nitin said.

The first part of their research involves developing plastic liners for bins or totes that would have antimicrobial activity and that could be recharged periodically with a bleach solution. The plastic polymers used in the liners would be designed to bind the chlorine to the surface.

The group focused on extruded polyethylene and polypropylene materials already used by the plastic manufacturing industry. In addition, Sun met with plastic manufacturers to ensure products that look promising could be easily ramped up to large-scale production. Nitin said the group initially focused on bin liners because they are more economical to test compared to reusable plastic containers, or RPCs.

Having an antimicrobial plastic liner also would benefit produce sectors, such as the apple industry, which still rely heavily on wooden bins. “There are many examples where wooden bins are common, and they’re very difficult to sanitize,” Nitin said. “If you can develop materials that keep them relatively cleaner, that should help them.” The group has successfully completed a demonstration that showed the liners killed Listeria, their target organism, as well as other pathogens. The next step is to conduct a proof of concept.

The CPS says Nitin (and his team) has successfully completed a demonstration that showed the liners killed Listeria, their target organism, as well as other pathogens, and are further along on doing the proof-of-concept – developing antifouling plastics that prevent Listeria surface contamination as well as formation of Listeria biofilms.Initial testing was conducted in the laboratory, but the researchers plan to eventually field test the materials in fresh produce processing facilities.

Initial testing was conducted in the laboratory, but the researchers plan to eventually field test the materials in fresh produce processing facilities.

In addition to measuring the materials’ ability to reduce pathogens, Nitin et al are also going to see examine the impact it has on produce quality after extended contact.

While they have started by testing food bins etc., Nitin “envisions the benefits extending beyond just packers but to companies that collect, sanitize, store, and deliver RPCs to packinghouses, distributors and retailers,” the press release says. They have also contacted a U.S. Army research facility interested in antimicrobial material technologies, CPS said.

Nitin and his team met with representatives from the Center for Produce Safety as well as several other industry representatives, including some from the apple industry, before they embarked on their research, the CPS press release says. “The input and feedback we’ve received from them has been very encouraging,” Nitin is quoted saying. 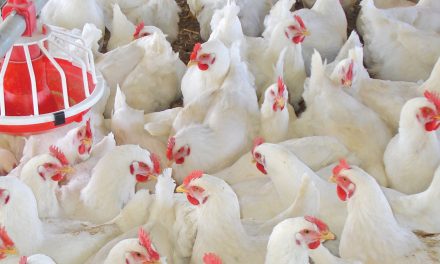